"Murder on the Mississippi" will be soon released! 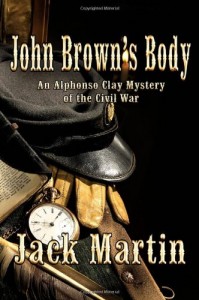 Book 1:  John Brown's Body:  An Alphonso Clay Mystery of the Civil War...An act of treason, a mysterious murder--and Grant's campaign in the West is finished unless the mystery can be solved.
The Mississippi Valley, 1863. - The Confederate fortress town of Vicksburg is the lynch-pin holding together the eastern and western Confederacy. Major General Ulysses S. Grant is tasked by Washington to capture Vicksburg, giving the Union complete control of the Mississippi, splitting the Confederacy and dooming it to ultimate extinction.However, there is treason in Grant's army--treason at the highest levels. His most secret plans are being leaked to the Confederacy; plans known only to a small group of high-ranking staff. But a security officer named John Brown has discovered something--something he will not entrust to any of Grant's officers. Instead, he frantically telegraphs for a pre-war friend, Captain Alphonso Clay, to come out West immediately; then Brown locks himself into a riverboat cabin, refusing to see anyone.Clay, a Union-loyal Kentuckian from a wealthy slave-owning family, responds to the call. He arrives at Grant's headquarters to find Brown has been murdered. Accompanying Grant's army on its march, racing the calendar, Clay frantically tries to discover the truth, knowing that if he does not solve the crime, Grants campaign will be at an end and the United States will cease to be. 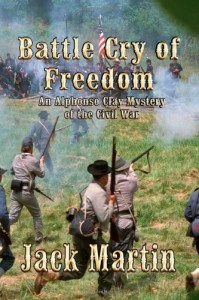 Book 2:  A Battle Cry of Freedom:  An Alphonso Clay Mystery of the Civil War....A traitor, a free-lance female spy, and a murderer--all must be dealt with or the Army of the Ohio is lost.Tennessee, Autumn 1863. Staggered by the loss of Vicksburg in July, the Confederacy has rebounded with a crushing defeat of the Union forces at Chickamauga. The shattered Union army now lies stranded and under siege.Washington has dispatched Ulysses S. Grant to retrieve the situation. But Grant finds that his task is made almost impossible by the presence of a rebel spy high in the Union command structure. Unfortunately, the only officer who could identify the spy is murdered before he can reveal the traitor's name.Grant dispatches Captain Alphonso Clay to find the murderous turncoat, but Clay soon finds himself in a nest of intrigue. To identify the traitor, he must solve the murder, deal with a lethal female undercover agent for the financier Jay Gould, and overcome a monstrous secret society that is older than the United States itself.

As Longstreet's army surrounds Knoxville, Clay races the clock to keep the Army of the Ohio from being betrayed to the Confederacy. If that should happen, the Confederacy would regain all that it lost at Vicksburg, and will be well on its way to ultimate victory. 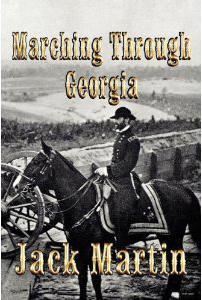 Book 3:  Marching Through Georgia: An Alphonso Clay Mystery of the Civil War . . .is even more riveting than it's two predecessors in the Alphonso Clay series by the Master of Civil War mysteries, Jack Martin. Set in the context of General Sherman's devastating sweep through the South to destroy its agricultural and industrial capacity and, consequently, its ability to maintain the Confederate Army, this book gives a strong feeling of the desperate desire of both sides to end the war. The fictional characters are quirky, and the historical characters are true to the known facts about their personalities. Alphonso Clay's behavior gives hints of his unnatural background. His actions are sometimes brutal to the point of being evil. Teresa Duval's evil is driven by greed and revenge. These two characters see each other for the dangers they represent, and their plotting intertwines with the hunt for a traitor to the Union Army whose actions are responsible for uncounted deaths. As Clay uses to advantage some of the enhanced abilities he was born with, he must also struggle to control the dark traits and maintain his standards of honor by the force of his will."

READ ALL THE REVIEWS ON AMAZON

Book 4:  The Battle Hymn of the Republic: An Alphonso Clay Mystery of the Civil War . . . April 1865. Robert E. Lee's Army of Northern Virginia has surrendered to Ulysses Grant at Appomattox Courthouse. The Civil War is all but over, the Union victorious. However, a sinister plot has been hatched to restart the war, and the assassination of Lincoln is only the beginning. The consequences could cost hundreds of thousands of civilian lives and tear the country apart forever. Colonel Alphonso Clay has been tasked by the Secretary of State to thwart this conspiracy at all costs. Aided by a beautiful, mysterious agent he embarks upon a dangerous journey into the heart of a cult even older than the United States that is determined to destroy the country. If they fail in their task, all that has been gained in four years of savage combat will be lost. 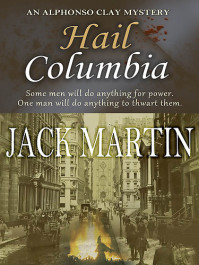 Book 5:  Hail Columbia: An Alphonso Clay Mystery of the Civil War . . . In 1869, four years after the Civil War has ended, Southerners bristle under the authority of a military government. Embittered Confederate veterans secretly form the Ku Klux Klan to fight what they perceive as their unjust oppression by the North. However, President Ulysses S. Grant views the Klan as a dangerous organization, using arson and murder to destroy the newly won rights of former slaves and sabotage Washington's authority in the South. Seeking to break the back of the Klan without returning the country to the destruction of the Civil War, Grant turns to his most trusted agent, Major Alphonso Brutus Clay, to find a solution to end the clan's violent activities in the South. Aided by his friend the writer Ambrose Bierce and by his lovely, terrifying mistress Teresa Duval, Clay embarks on his greatest challenge yet. Not just to prevent a second presidential assassination, not just to preserve the unity of the country, but to prevent a secret cabal of corrupt financiers from gaining control of the United States, and to save the world from the designs of an organization far older than the United States itself.