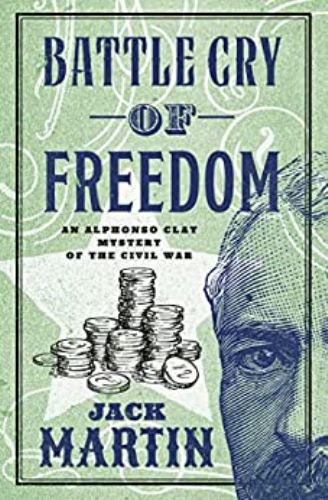 The Battle Cry of Freedom is the 2nd tome in the Alphonso Clay Civil War Mystery Series.

A traitor, a freelance female spy, and a murderer must all be dealt with or the Army of the Ohio is lost.

Tennessee, Autumn 1863. Staggered by the loss of Vicksburg in July, the Confederacy has rebounded with a crushing defeat of the Union forces at Chickamauga. The shattered Union army now lies stranded and under siege. Washington has dispatched Ulysses S. Grant to repair the situation. Grant finds that his task is made almost impossible by the presence of a rebel spy high in the Union command structure. Unfortunately, the only officer who could identify the spy is murdered before he can reveal the traitor’s name. Grant assigns Captain Alphonso Clay to root-out the murderous turncoat, but Clay soon finds himself in a nest of intrigue. To identify the traitor, he must solve the murder, deal with a lethal female undercover agent bank-rolled by financier Jay Gould, and overcome a monstrous secret society that is older than the United States itself. As Longstreet’s army surrounds Knoxville, Clay races the clock to keep the Army of the Ohio from being betrayed to the Confederacy. If that should happen, the Confederacy would regain all that it lost at Vicksburg, and will be well on its way to ultimate victory.